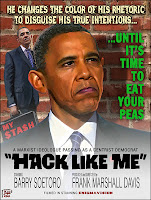 The enigmatic Obama, jumping from fundraiser to fundraiser, staying cool while the nation and the world spin out of control. The only thing that animates him is blaming his shortcomings on his political opponents. At his appearances, he plasters on that phony grin, tells a few whoppers and chokes out "God bless the U.S.A.," just like every hack politician since the beginning of time. But if he gets back into office, we'll see the real hacking begin as he takes out America's other leg. –Dale
Posted by Dale

And a Good Morning to you all here, fellow citizens, on this fine morning when the Muslims are attempting to slit our throats at every American embassy in the Middle East today, pissed because they didn't get us all back in '01. Maybe the bad spirit of war was called up from the DNC seance of Obama, Michelle Antionette, Karl Marx, Joe Biden, Judas Iscariot and Pontius Pilate, rather than a grainy homemade video that's been out on Youtube for at least a year, according to what I heard on radio this morning. I'm just kinda wondering, being how it's so close to election time and all...

DC --- You have a suspicious mind, my son. Can't you tell how much they care? You should say 9 hail Barry's and make a donation to Obama for Amerika.

This is just the 1st step in a foreign policy crisis manufactured to take attention off of the economy. When Barry-O marginalizes Israel to the point where they go solo on Iran, then you'll see him "solve the crisis" to get the Jewish vote.

BTW: I think it would be cool to depict Barry-O as the "Phantom of the Obama", where he's taking off his 1/2 face mask to reveal Jimmy Carter underneath, with lady Liberty as the innocent woman held hostage. Just sayin', not telling :-)

Once again, thanks for the great work - always a pleasure!

A real Congress would impeach this Golden Pantload for treason.

This picture is like looking into the future; the large image being Big O's reaction on November 7th and the smaller image his historic journey back to Chicago as America's first black ex-president.

The rest is just painful truth.

And exellently executed as always Dale!

"America's first black ex-president..." What a lovely little symphony of sound that makes on the ear. Play it again, Neil.

Or a cartoon of Hillary celebrating Eid ul-Fitr with the Libyan Ambassador before the American Ambassador and the other three State Dept. people's tortured and sodomized bodies are even returned to the US.

The hits just keep on coming the ObamaNation.

Also, Barack as Nero, fiddling while the Middle East blazes...

I hear ya, LL. We ought to be kicking the $hit out of Libya this morning, then drawing a large line in the sandpit and letting the rest of the nesters know that if they cross this line, the rest of 'em are going to get it too. But thanks to Oscar Meyer Obama at our helm, we look like a damn pack of weenies. Has anyone seen our military around? We've got 50 Marines down on the ground, a few extra drones in the air today, and apparently our battleships are parked in the Gulf, working a crossword puzzle and having a cup of coffee. I have six relatives who are retired Navy and my grandpa went at it hand to hand with the Nazis back in WWII. I'd give my rebel flag today just to hear what Gramps would have to say this morning about the situation. The Muslim in the White House ain't gonna touch his brothers. We are sitting ducks!

Dale, as always you are incredibly incisive and really hit the "sweet spot!" You do so elegantly without resorting to racist slurs or bad language. In my never humble opinion, you are a GENIUS!!!!!!!!!!!

Thanks Anonymous. His pigmentation has nothing to do with what a horrible president/American he is, and how incredibly dangerous his politics are. If I were a genius, I'd be rolling in dough and not having any problem thinking of a theme this week. Thanks again for your post.

Anonymous, you can bill it as "racist" if you'd like. So far, you can state your opinion and I can state mine. Let's see after the election whether either of us gets to exercise our First Amendment rights and continue to state our beliefs publicly without being arrested. I don't have a problem with Obama being black, I have a problem with an extremely bad president and evil man who happens to be black. I do believe, however, that Obama was elected BECAUSE he is black. The man had no qualifications for becoming a U.S. president. I believe he was not your standard old white guy on the hill; people thought he was new and different and it could be the modern PC thing to do to hire a black man to head the country. I also believe that billing someone a "racist" because they have a differing viewpoint from yourself is at least 90% of what got this country into the morass that it is in today. I'll agree with you that bad language on a public forum will get no gold stars in an etiquette book somewhere, but bad language can sometimes be the best option in a circumstance. My apologies if I offended anyone here with such.

Dale, you must have a time machine or a crystal ball or something.
You managed to capture exactly Barry's expression at the debate more than two weeks before the event! 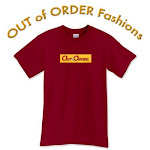